Two weeks ago I went to the EPiServer Meetup where Bartek Tatkowski talked about EPiServer and CI. This got me inspired to write about how we do CI and deployment in my current project. The site we are building is an EPiServer 6 CMS Enterprise site based on .NET 4.0 and ASP.NET MVC 2.0 (I blogged about it back in April). When we started the project we had very clear goals regarding CI and deployment:

I am very happy to say that we have fulfilled all our above goals, let me tell you have we did it.

Build process and the release package

We are using TeamCity as build server. TeamCity is great build server which support numerous different build agents and it hooks up very easily with our Mercurial version control system. This is what a typical check in/build/package scenario looks like:

By downloading and extracting this file you get a file structure that looks like this: 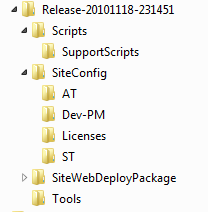 Scripts – contains various scripts needed to perform deployment, the most important being Deploy.ps1 and Deploy-Local.ps1.

SiteConfig – contains shared settings and one directory per unique environment (AT = Acceptance Test, ST = System Test, Dev-PM = My development environment). In the SiteConfig directory we also find the following files:

The settings.xml is the base of all non-episerver settings. It contains connection strings to databases, paths to where the web site should be installed, where logs should be placed, where VPP files are placed, integration settings to external systems and much more.

A simple example let pretend this is our \SiteSettings\settings.xml:

Say that I would like to override where the logs are stored in my ST environment. To do this I would create \SiteSettings\ST\settings.xml, containing:

The merged config would be:

We use this for both development and deployment. When a developer checks out the source code, there is a “Init.ps1” script in the Scripts folder (not included in the release package). This script will setup the website according to the specified settings (in my case the Dev-PM folder). The script configures the local IIS server, creates app pools,  creates the sites, sets permissions on folders, creates local MSMQ queues, configures NServiceBus and so on. Thanks to this script all the developers have a development environment that is nearly identical! Super sweet!

Ok, back to deployment. As you might have figured out, the episerver-config.master.xml serves as base for all episerver sites. Since this is an enterprise installation we can have several sites and each –siteX represents such a site.

All the settings in the files are overridable in the same way as with settings.xml. We use this to, for example, provide the appropriate license file for the specific environment.

This might be the least exciting directory, it simply contains a MS WebDeploy package created by MSBuild. This package contains everything needed to run the sites, except for the site specific configuration files that Deploy.ps1/Deploy-Local.ps1 will put in place.

Tools
This directory contains our “deploy tool chain”. The tool chain includes, MSDeploy.exe (WebDeploy), SimpleScriptRunner.exe (DB migration), 7za.exe (zip) and a bunch of other tools needed to setup and install Msmq and NserviceBus.

When we started implementing the automated deployment we were hoping to be able to do most of the heavy lifting in WebDeploy. But after a lot of research and testing we came to the conslusion that it was probably possible to do what we wanted to do in WebDeploy (WebDeploy is very powerfull), but we could not figure out how. The WebDeploy documentation at that time was almost non-existent and had few advanced examples. Instead we made the decision to use PowerShell for most of the work and use WebDeploy only as a method to package transfer files.

This is the steps needed to perform a deployment:

This is what Deploy.ps1 does:

If the update of some reason is not working as it should, the update can be easily rolled back by executing “Deploy.ps1 <environment> -Rollback”. This will restore all affected system to exactly the same point as they were before the update.

Automating the build and the deployment process is absolutly worth the effort it takes to implement it. By automating the process we have been able to catch more bugs, develop and release faster and at the same time make the entire process less dependent on certain people in the group – our knowledge is documented in the build and deployment scripts.

A very nice bonus from this is that we can version control everything related to the site, IIS settings, EPiServer settings, EPiServer Licenses and much more. Also, installing the release on a “empty” server is as easy as updating an existing installation.

The tools that made all this possible:

SimpleScriptRunner – Tool to run a directory of numbered sql scripts against an MSSQL database.

Back to homepage 3 comments